Alaçatı (also known as Alatsata, from Greek "Αλάτσατα" or Agrilia, from Greek "Αγριλιά") is an Aegean town on the western coast of İzmir Province in Turkey, which has been famous for its architecture, vineyards andwindmills for over 150 years. It has now made its name in the world of windsurfing and kitesurfing, with its crystal clear water, consistent and steady wind and well acclaimed hospitality. Alacati is one of the most authentic towns in Turkey with stone houses, narrow streets, boutique hotels and restaurants with tables on the streets. Alacati has a great nightlife, where the nightclubs by the seaside are open until morning. The area is also home to the Alacati yacht marina and the famous Port Alacati development.

Alaçatı became an Ottoman town in the 14th century, according to some; in the 15th century, according to others. Regardless of the date, Alaçatı was originally settled by Greeks in the 17th century. The Muslim population was 132 out of a population of 13,845 in 1895. After the defeat of the Ottomans in the Balkan Wars, Ottoman Muslim refugees fled to the western coast of Anatolia. The Greek population of Alaçatı was forced to leave in 1914 and the village was empted. Most of the Greek returned in 1919 during Greek administration of Smyrna (1919-1922) when

the Hellenic Army occupied the region of Izmir. The majority fled hastily with the retreating Greek Army following Greece's defeat in the Greco-Turkish War, 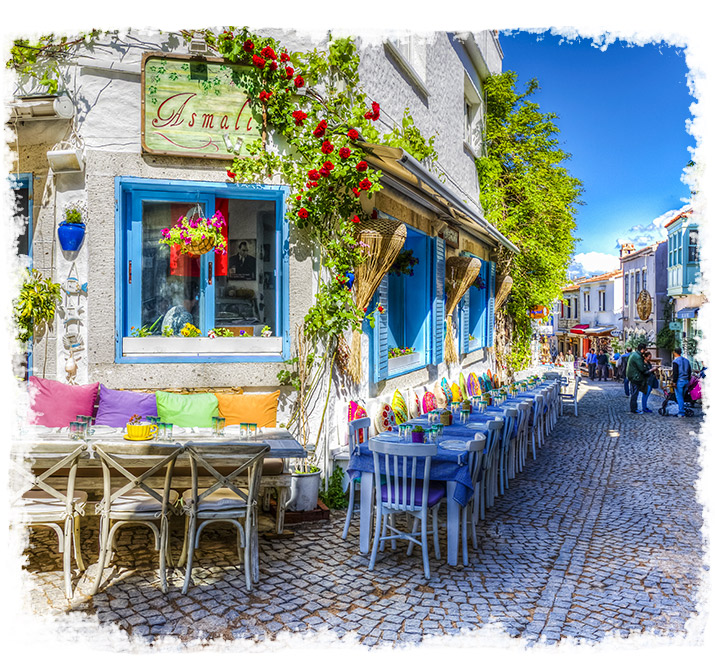 whilst others fled from the shores of Smyrna. The unilateral emigration of the Greek population, already at an advanced stage, was transformed into a po

Under the Treaty of Lausanne in 1923 and according to the implementation of the compulsory exchange of populations, Muslims who lived in Crete, Thrace, Macedonia and Dodecanese settled in Alatsata city in the houses abandoned by the Greeks. Most of these houses still remain in Alaçatı as an attraction for people to see and absorb the feeling of life in the past.

Alacati has stone houses and narrow streets with pavements. The centre of Alacati only has old Greek houses which are over 100 years old. As the town was declared as a historical site in 2005, the buildings are well protected. The new houses built recently built closely are constructed by using exactly the same architecture.

The experiences of novelist Mehmet Culum during his travels in the region inspired him to write Alaçatili, his second novel.